It has been a minute since the Carbide series was announced back in October with the housings meant for the C6 Corvette, Toyota Tacoma, and Ford Ranger. These are great headlights and with their new housing meant for the 2014+ Toyota 4Runner, you can bring a vastly superior level of performance and styling to your SUV. 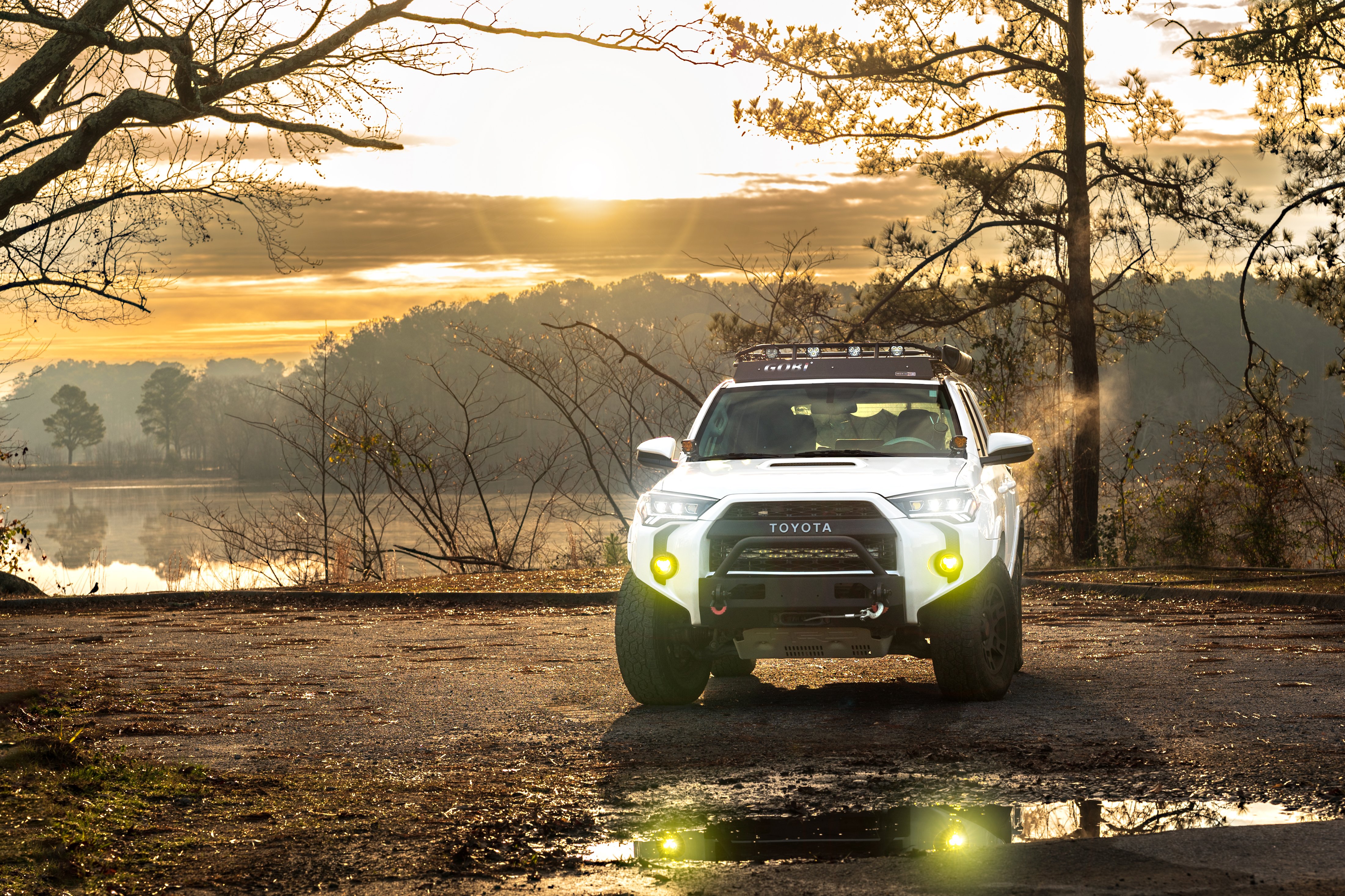 In short, these headlights present a great middle-ground between your OEM headlights, and the pricey (but deservedly so) Morimoto XB LED housings. You are receiving OEM+ performance and the same build quality, modern design, and plug-and-play capabilities that Morimoto is so well known for. 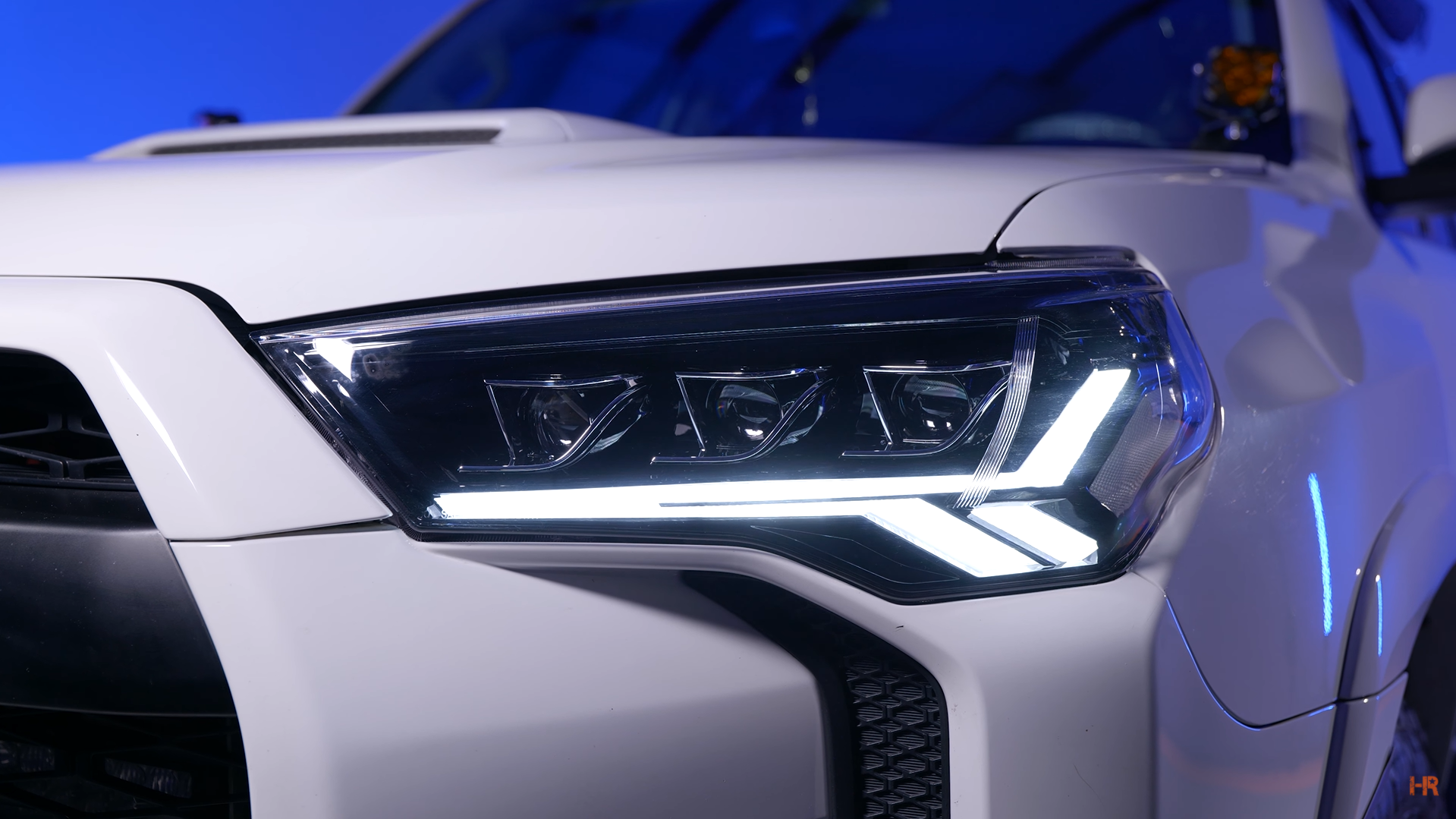 The futuristic daytime running light (DRL) really stands out on this model for us. As mentioned before, these take inspiration from the current range of Lexus OEM headlights that have sharp, aggressive lines to their DRLs.

When you flick your headlights on, these DRLS dim down to 50 percent of their brightness. Either way, these really stand out and they do a great job of improving the front design of the 4Runner. The DRL also features a sequential turn signal that is practically standard for aftermarket headlights. 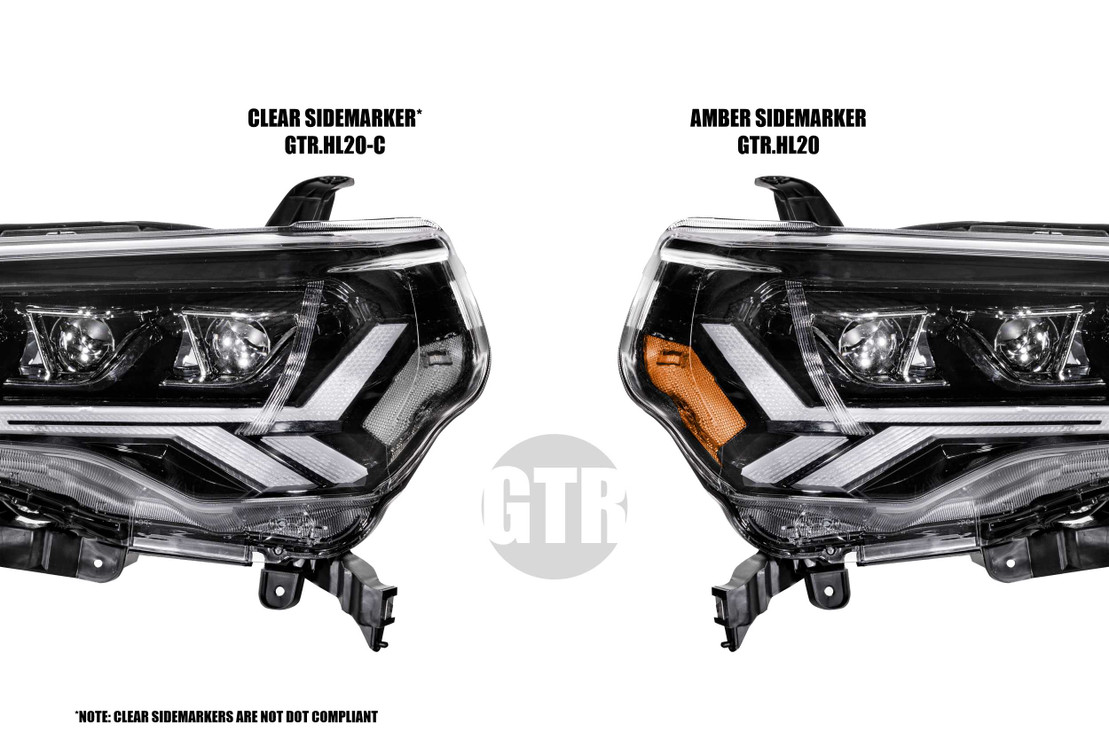 Lastly, these Carbide Series LED headlights are built to an incredible standard. Much like the Morimoto XB LEDs, these lights use a UV-resistant coated polycarbonate lens to protect them from any wear from the Sun. The rear of the housing is also built with quality materials to protect it from the elements.

To get an accurate and consistent result for all the lights we test, we will park the SUV 25 feet away from the wall and turn the lights on. Then we will get a digital Lux meter to measure the intensity of the lights. The Lux rating is not the important factor in this test, but it is the percentage increase from one headlight to another.

To begin with, we tested the stock halogen headlights on a low beam at 220 max. Lux. This is a little low for OEM headlights, but pretty average. The Carbide Series headlights came in at 800 max. Lux, a 263 percent increase over the stock headlights. You are also getting an improved beam pattern with sharper cut-off lines and a more even spread of intensity. 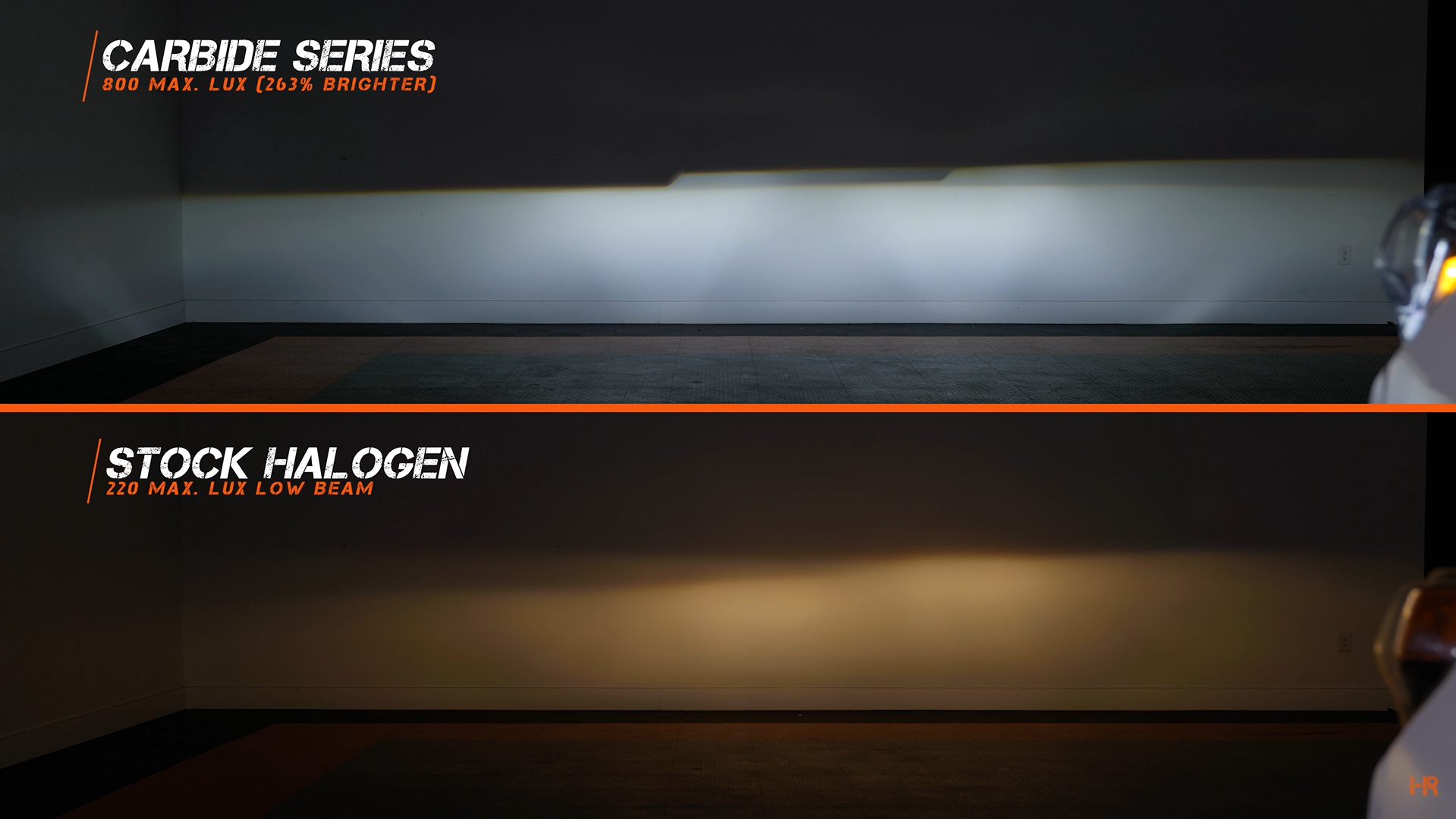 For added measure, we also have the Morimoto XB LED headlights for the 4Runner here. On low beam, the XB LEDs are 540 percent brighter than stock (1410 max. Lux).

Moving on to the high beams, the stock headlight was tested at 730 max. Lux where the Carbide Series headlights came in at 1250 max. Lux; a 71 percent increase. Once again, you also get a stronger beam pattern with coverage that is both deep and wide. 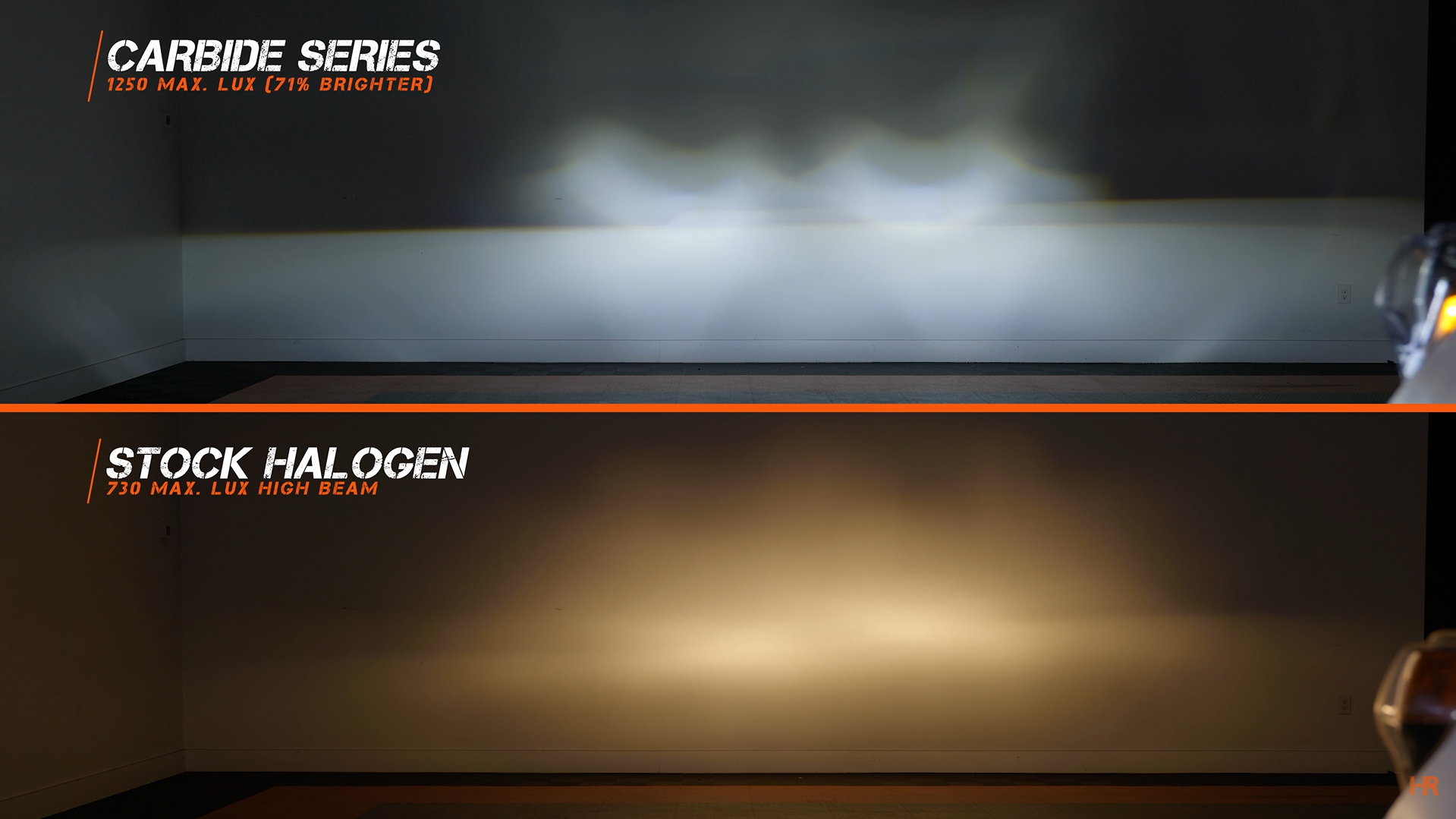 For the high beams, the Morimoto XB LED headlights came in at 1940 max. Lux, which makes it 165 percent brighter than stock. 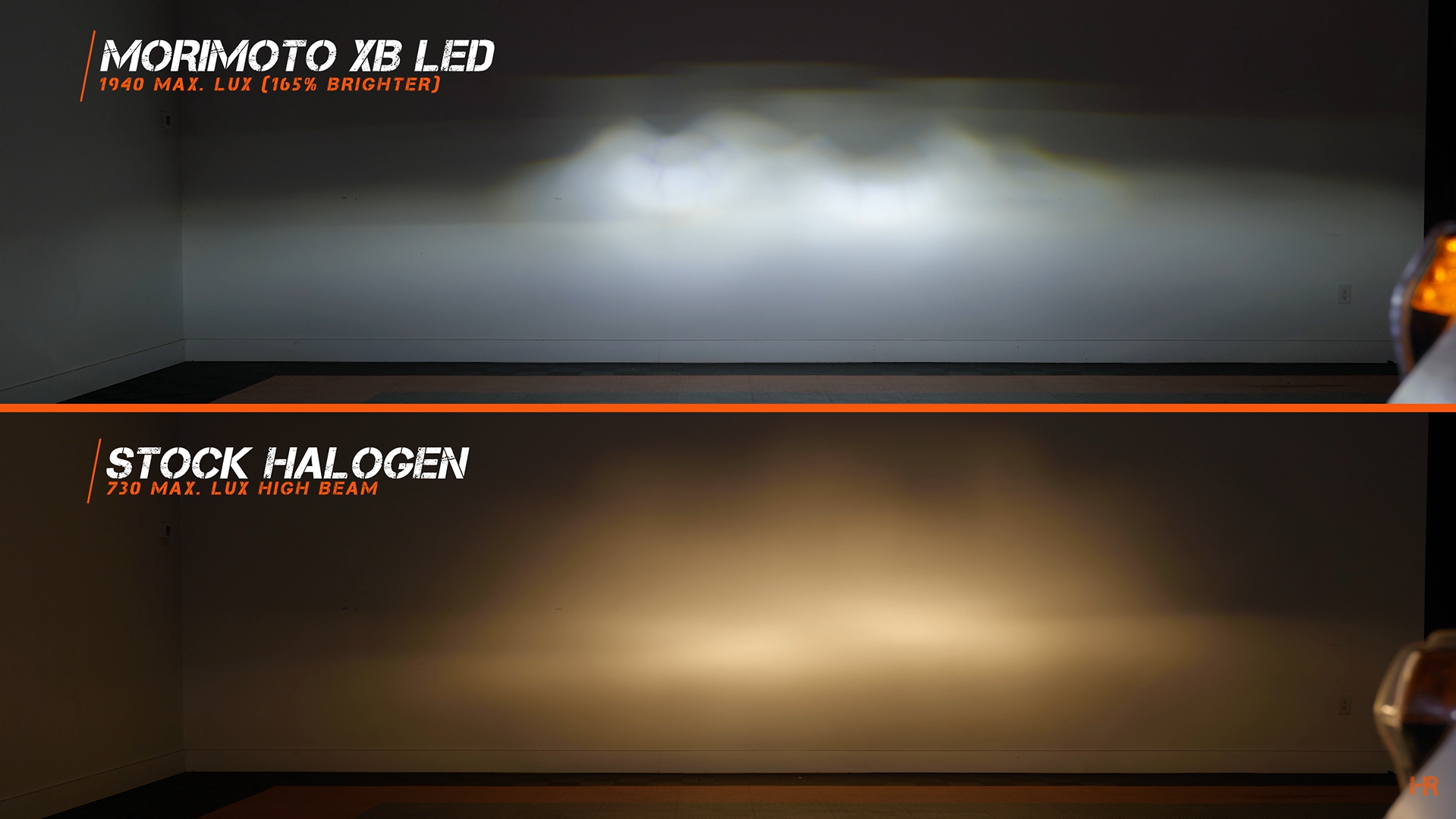 Overall, the Carbide Series headlights are incredible housings when it comes to a number of aspects. Both outperform the OEM housings but if you are wanting to absolutely level the OEM parts and are willing to spend the extra cash, the Morimoto XB LED is your headlight. If you are looking for something a bit more affordable while also gaining a quality product, the Carbide Series Headlights by GTR Lighting are a great option. 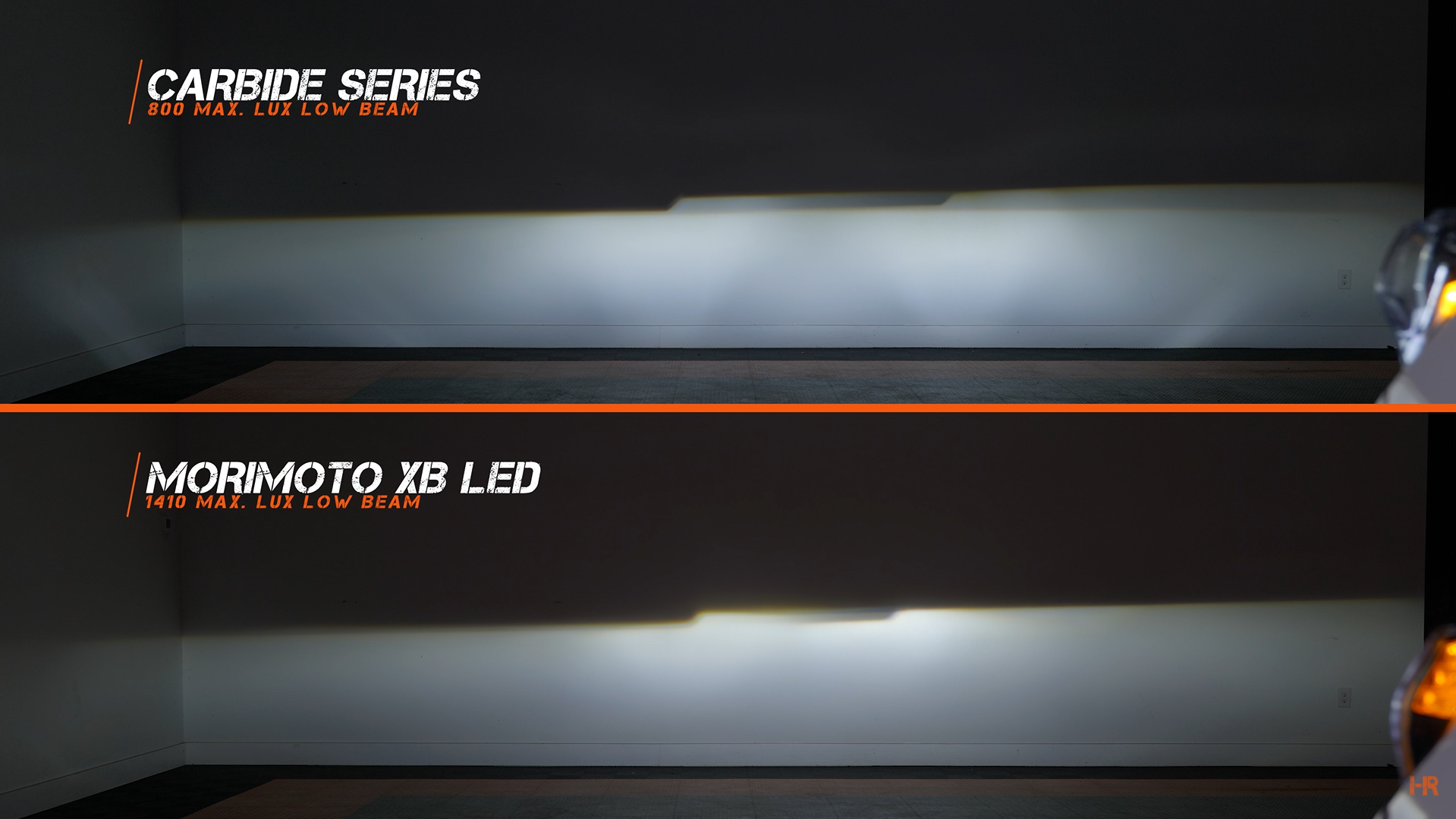 We ended up using a 4Runner with a modified factory bumper for our installation. The process is pretty similar but if you are unsure on how to remove the bumper fully, check out our video here of the XB LED Headlight install.

First, begin by removing the three 10mm bolts in the wheel wells. On ours, there is only one bolt due to the bumper being cut. 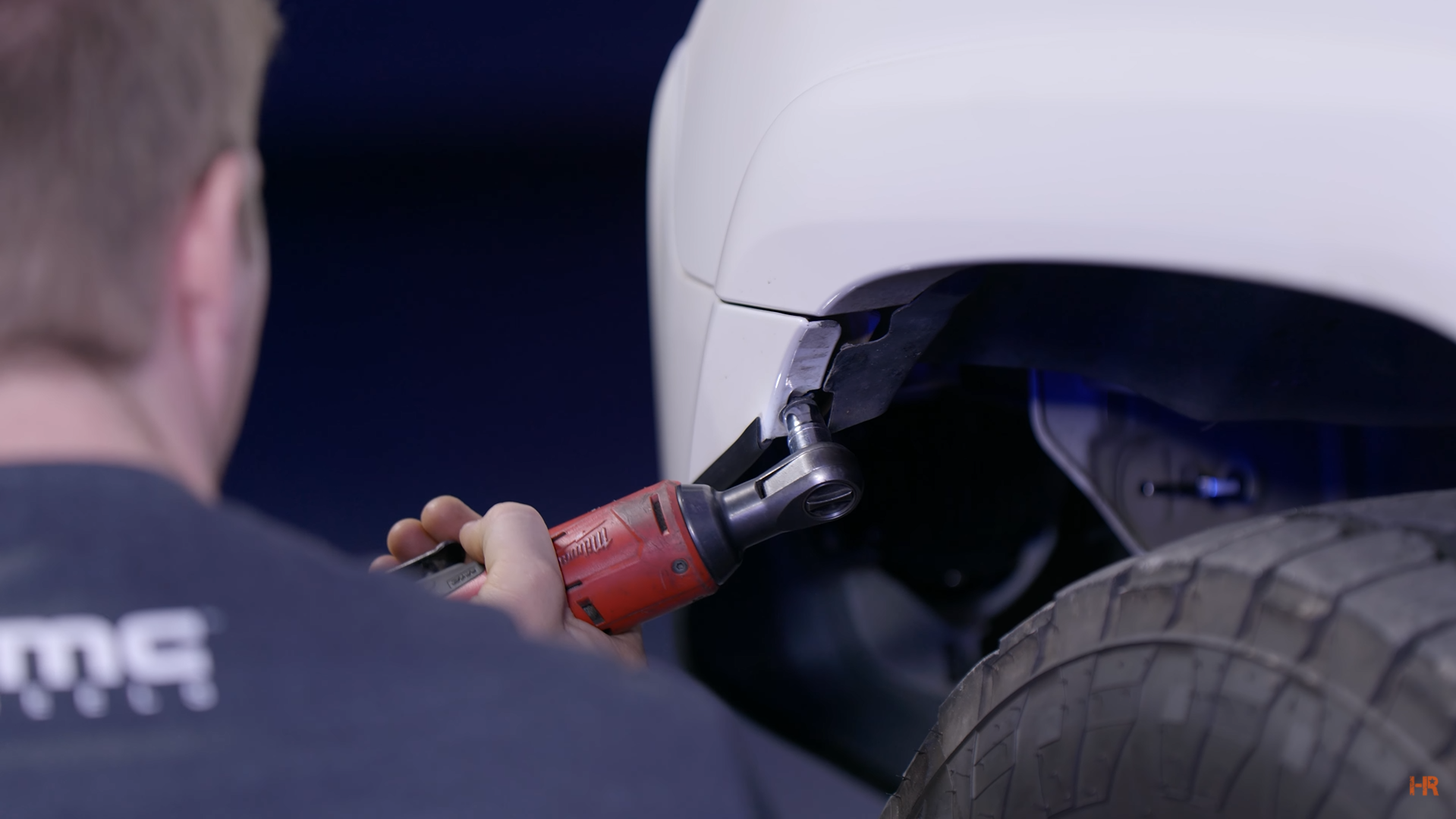 After the bolts have been removed, there are three plastic clips to push back. Doing so will separate this part of the bumper from the fender lining. Additionally, if you are going to fully remove your bumper, we recommend unplugging your fog lights from your vehicle.

Next, undo the three bolts located at the base of the bumper in front of both tires. There should be two silver 10mm bolts and one black one. On the passenger side, there will only be a silver and black bolt.

There are two more 10mm bolts located at the center of the bumper, beneath the car.

You can then pop your hood and remove the plastic radiator cover by removing all 13 plastic pins. Push them in and then use a pry tool to remove them entirely. 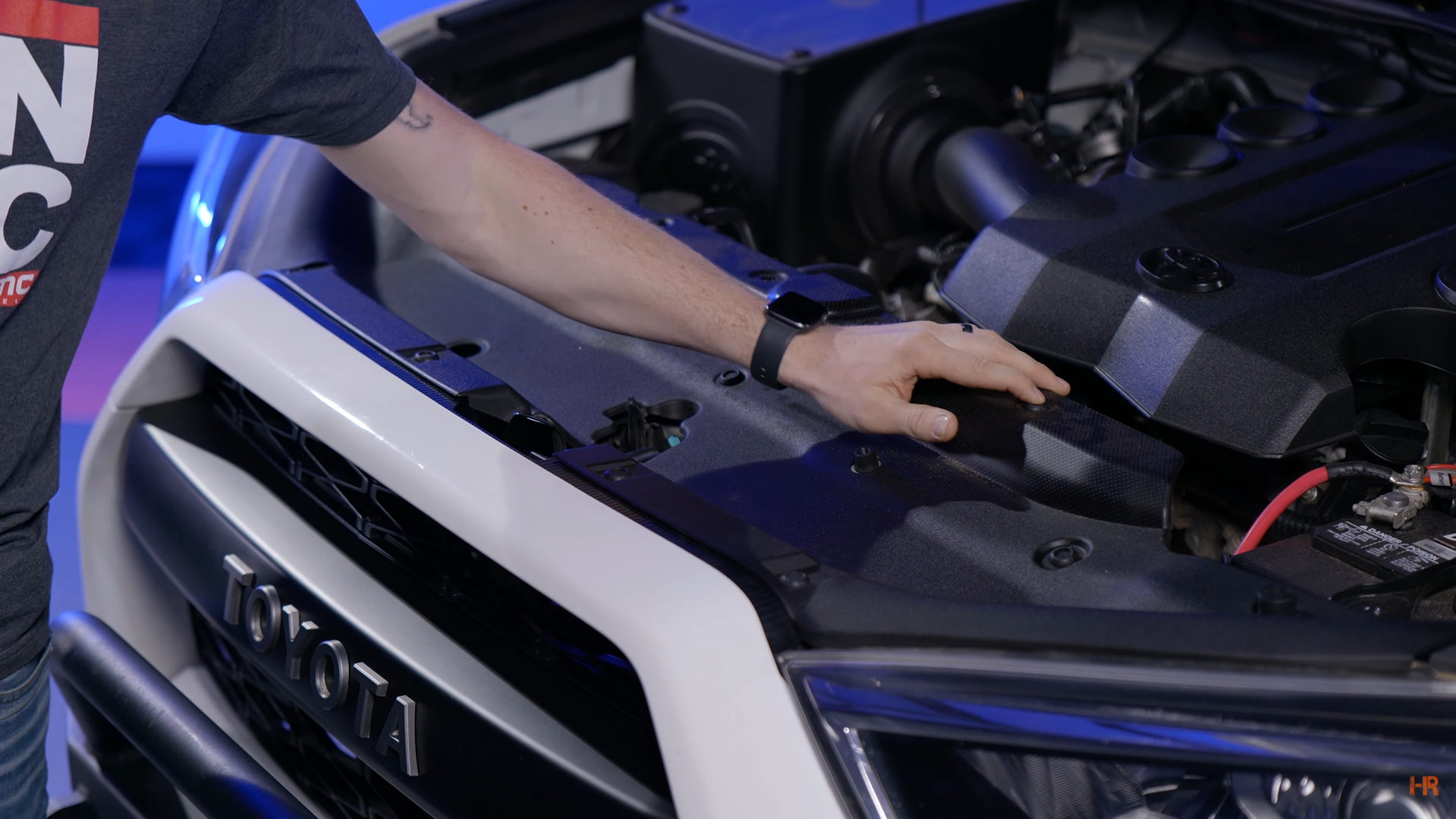 Removing this plastic piece will reveal two plastic pins located toward the exterior corner of the headlight and the interior corner. Remove these and repeat for both sides of the car.

Next, there are four plastic pins dotted across the interior side of the grill. Remove these.

Remove the 10mm bolt at the center of the grill, too. 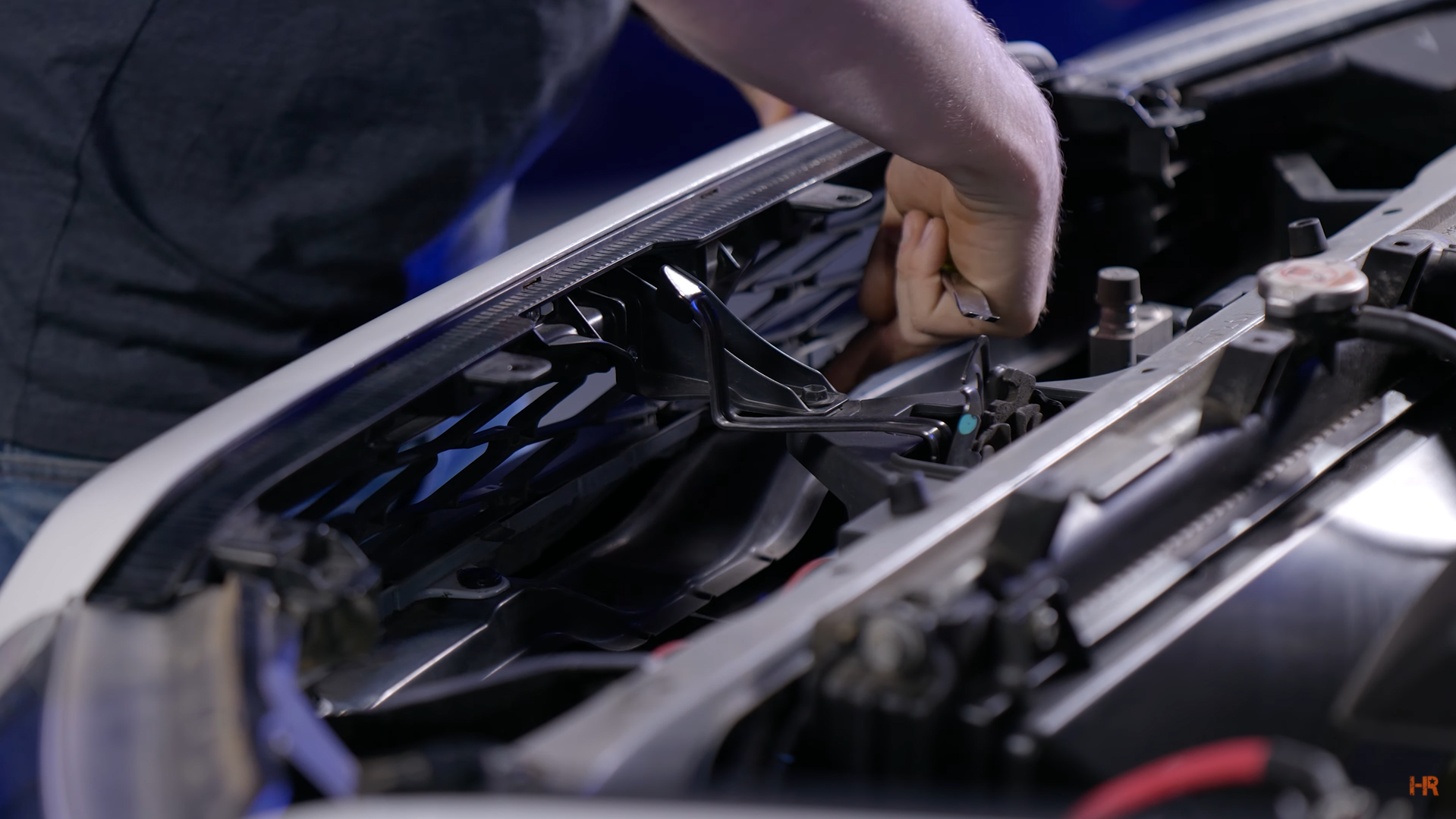 You can now begin to pry the bumper slightly away from the car. 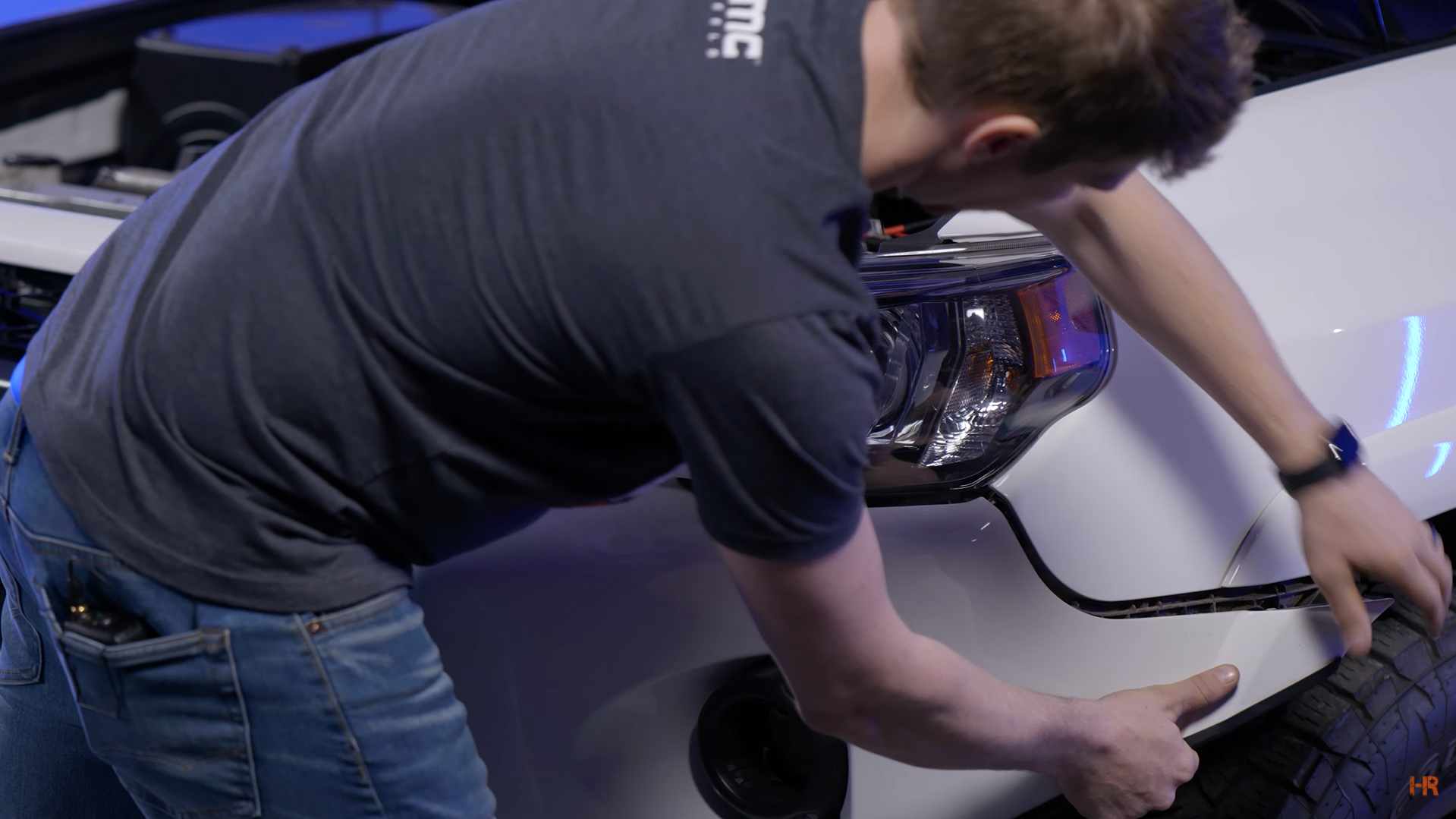 Before putting in the Carbide Series headlights, we will first plug in our DRL harness. Go to your fuse box and remove the cover. You will want to remove the 10A fuse pictured below and plug in the DRL harness here. 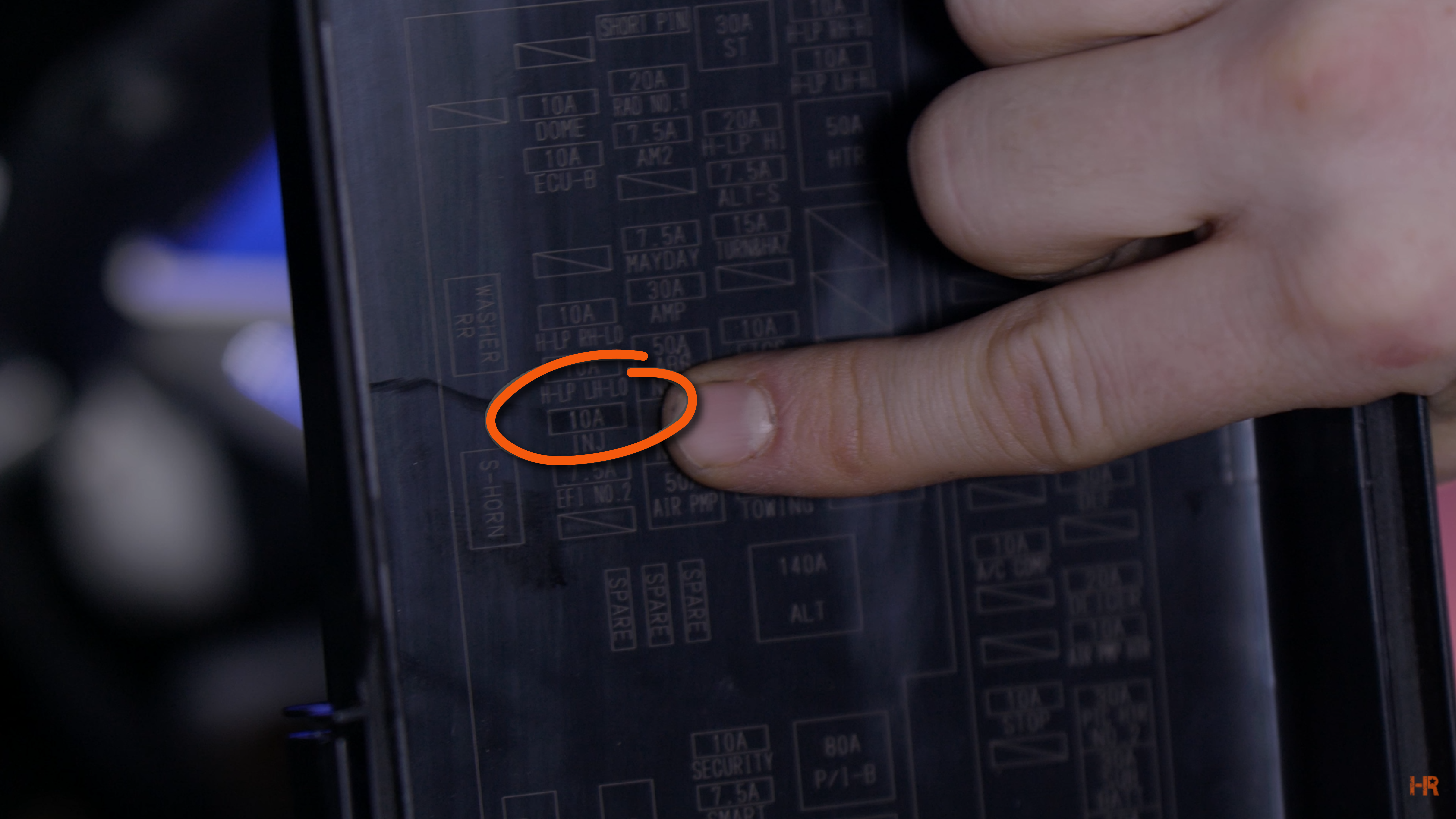 Take your Carbide Series headlight and use its factory connectors to connect it to the car. Then plug in the DRL harness we just ran to each headlight.

If you are experiencing difficulties with the DRLs after installing these housings. We recently wrote another article covering the fix to this problem here. It is a super quick fix and does not require any wiring work. 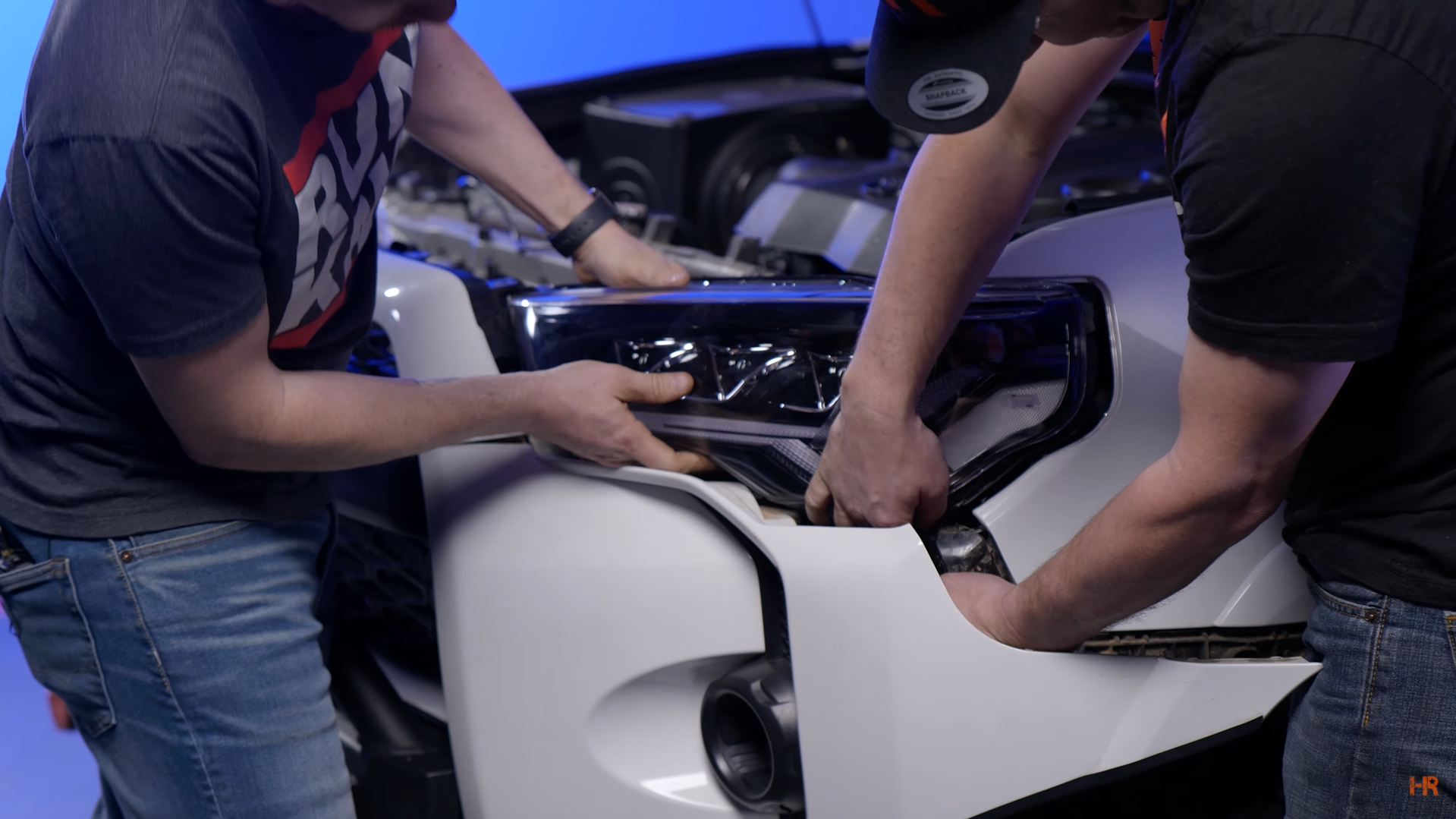 Before bolting everything in and cleaning your wires up, make sure to test the lights to ensure they work correctly. Once you have confirmed this, you can then put the front of your car back together.

If you are interested in learning how to aim them, check out our blog post and video where we go over just that (it is super easy we promise)!

How to Solve the High Beam Flicker from an LED Bulb on 2014+ 4Runner
by Headlight Revolution posted on February 18, 2022

If you have aftermarket LED bulbs in your 2014+ Toyota 4Runner, you may have experienced some flickering when you are off-roading. Unless you are hosting a rave for the woodland critters, the flickering gets annoying. Luckily for you, we have an easy fix for you. 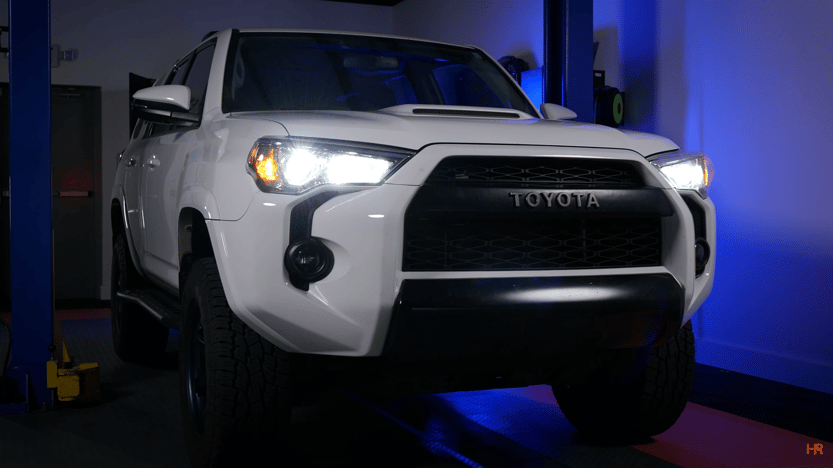 All that will be needed for this fix is a pair of needle-nose pliers and about 1 or 2 minutes of your time. This only applies to OEM housings and aftermarket LED bulbs. If you own a pair of Morimoto XB LED headlights, this fix is not for you. If you do this procedure on an XB LED, it may damage your headlights and their performance.

Say hello to the GTR Lighting Ultra i-LED bulb! This is one of, if not THE brightest turn signal on the market and it is a must-buy for your 2014-2021 Toyota 4Runner. These are indicator bulbs that really transform your turn signals from a dim orange to a bright and sharp amber color.

Headlight performance is the most important thing in the world when it comes to automotive lighting, but you cannot overlook the turn signals. With the GTR Lighting Ultra i-LED, you are getting a brilliant combination of style, safety, and performance. There is no chance of someone missing you making a turn with these on. 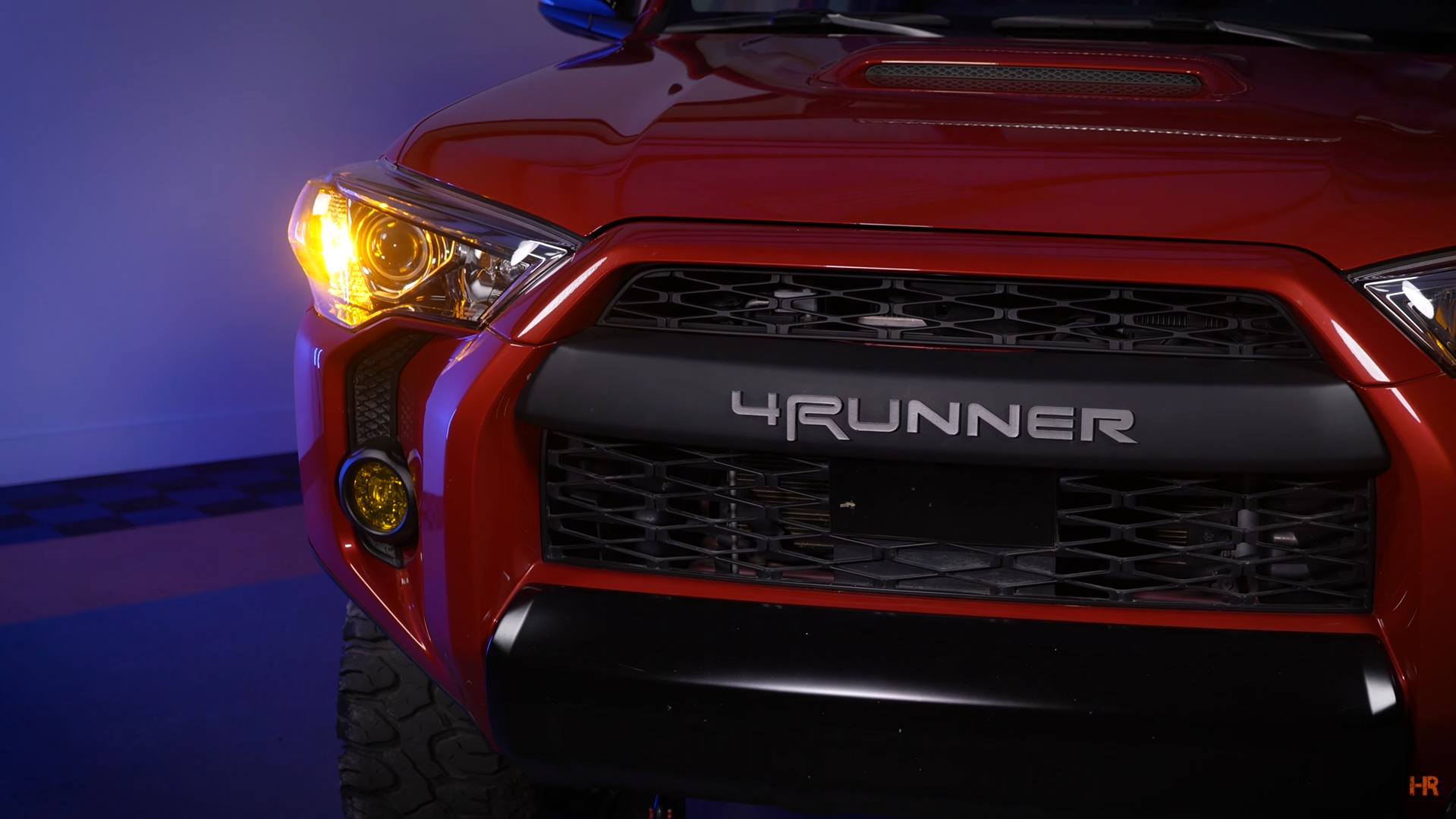 Fog lights are one of those lighting upgrades that can benefit any 4Runner owner. If you like off-roading and camping under the desert stars fog lights are great for seeing the area around you. If you drive a lot at night going to and from work, LED fog lights will be great. There is no better fog light than the Morimoto 4Banger! 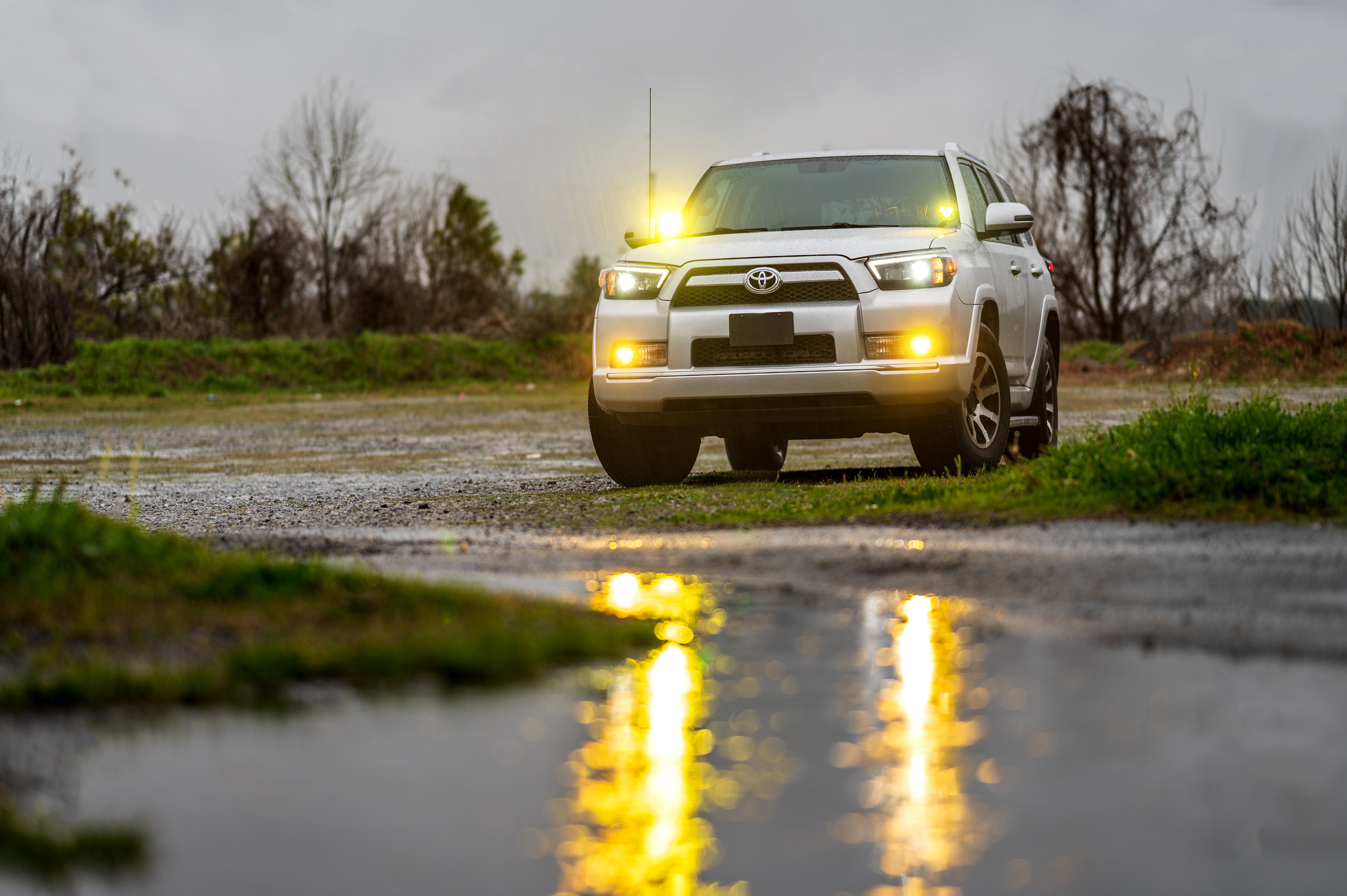 We are looking at how to install the 4Banger pod lights on the 2010-2013 4Runner generation that Morimoto produced a bracket for. These cars are insanely popular, and it is not surprising to see a brand like Morimoto cater to all possible 4Runner owners. 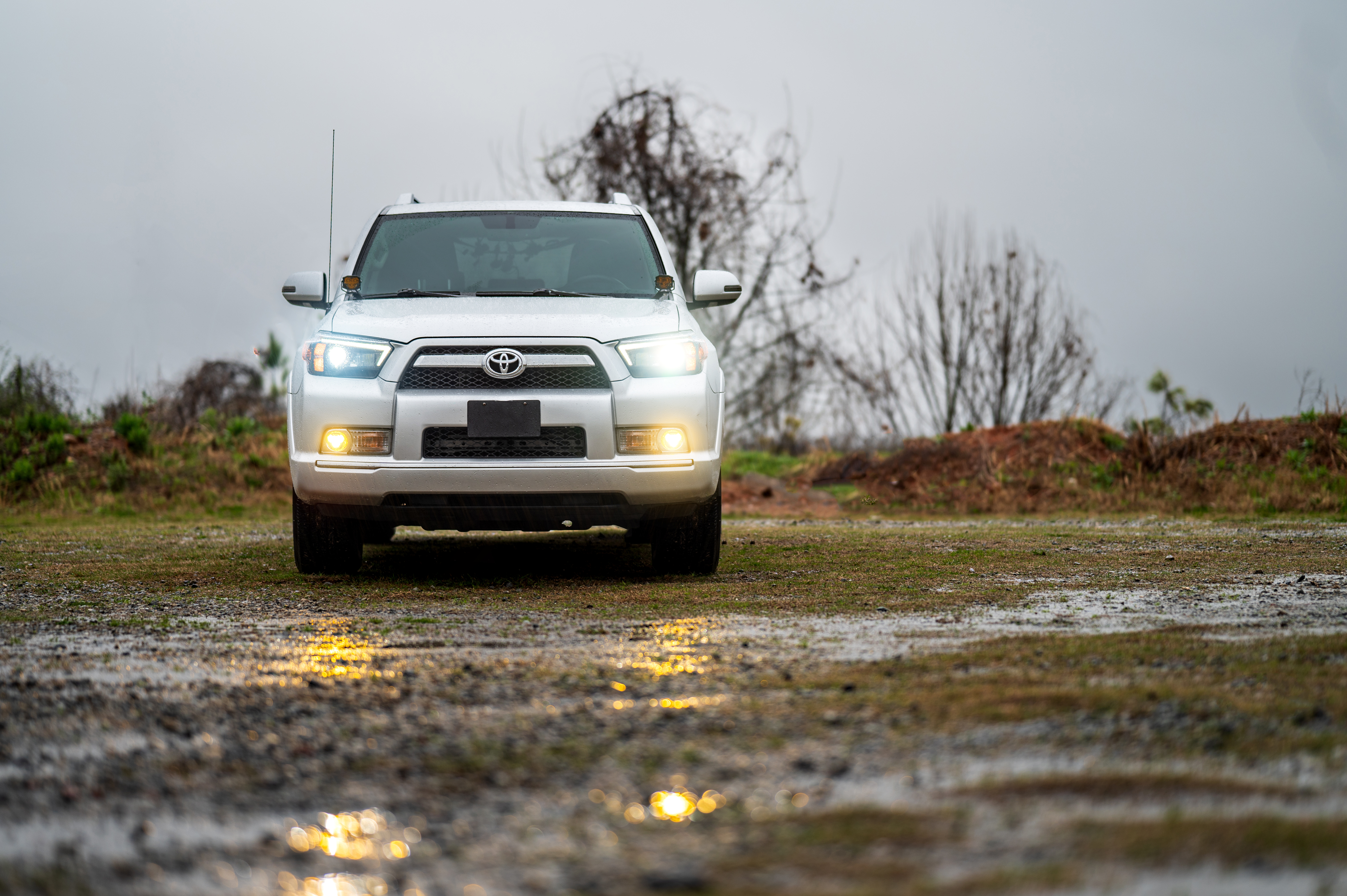