You guys have been asking us to test many different bulbs that we've never tested before on this channel. So if you still feel like we're missing something from this test, go ahead and drop a comment below so that we know what to look into next time we do some filming.

Today we've got: the SNGL, Philips, Hikari, VLEDS, Headlight Experts, OPT7, GTR Lighting, Morimoto, Car Sparkle, JDM Astar, NOVSight, Diode Dynamics; pretty much everything that anybody's ever said, "Hey, what do you think about this brand of bulbs?" Today, we've got in front of us, and we're going to figure out what's the best.

First, we'll test on a projector headlight, then on a reflector headlight. Stay tuned until the end, where we show you the total combined results of all testing.

When we tested all 25 led headlight bulbs, the one that came out on top for this projector headlight was the GTR Lighting Ultra 2. This thing came in 400% brighter than the original halogen headlight bulb. 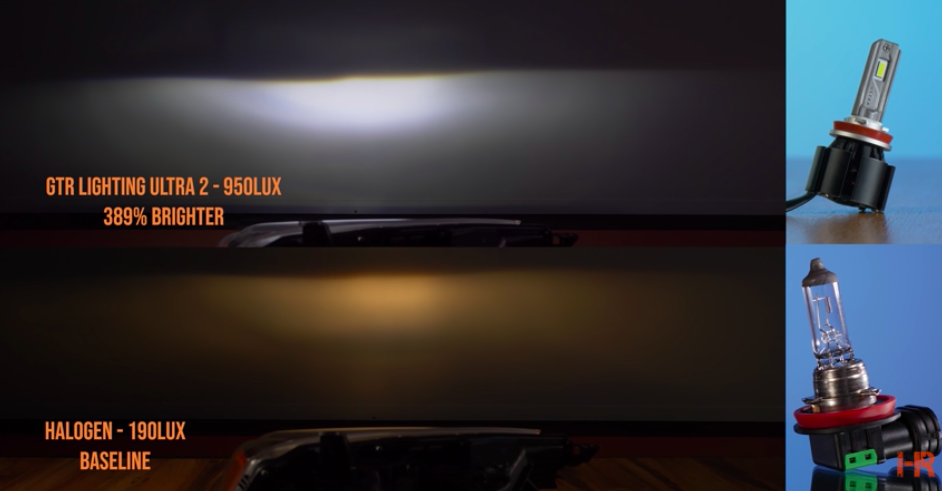 The next brightest bulb in the entire lineup was the S-V-4. The S-V-4 is already a crowd favorite, and in this test, it came in at 347% brighter than stock.

Not quite as bright as the GTR bulb, but it's a good option. 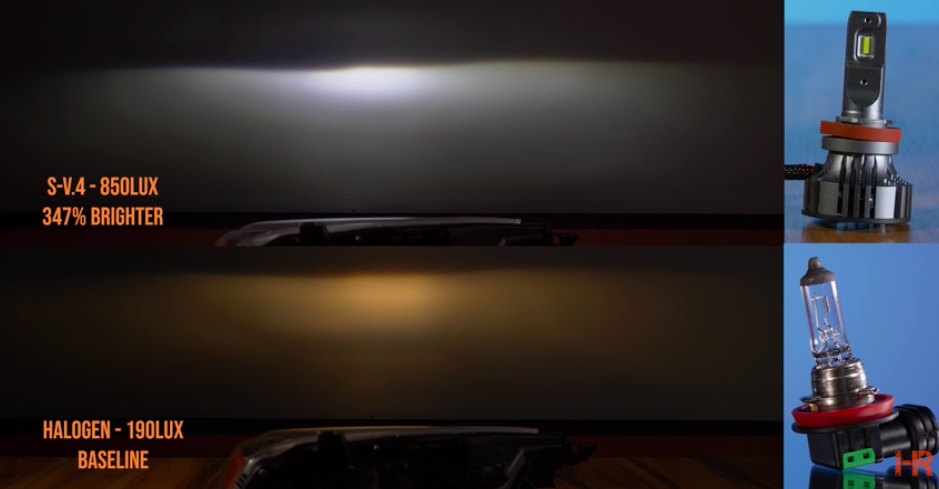 It's no surprise to me that the third brightest option was the F3. With this bulb, you can get it from various brands, and they all come from the same place in China. It is a small body bulb with an extremely bright led and a tiny heat sink. Even though it's bright, it has a big problem. It's unbalanced.

The amount of heat this ultra-bright led assembly overpowers the cooling capacity of this heat sink. The whole thing is anodized with black.

One of these we had running for one hour, and the bulb got so hot that the black anodized coating burned off in just an hour.

I can guarantee you you're going to have similar results running this kind of bulb on your vehicle. Who knows what kind of damage it could create or have to deal with the inconvenience of constantly swapping out burnt-up, defective led bulbs. So even though this bubble is one of the brightest in the bunch, I can't recommend it for anybody to use. The F3 came in at 315% brighter than the original halogen bulb. 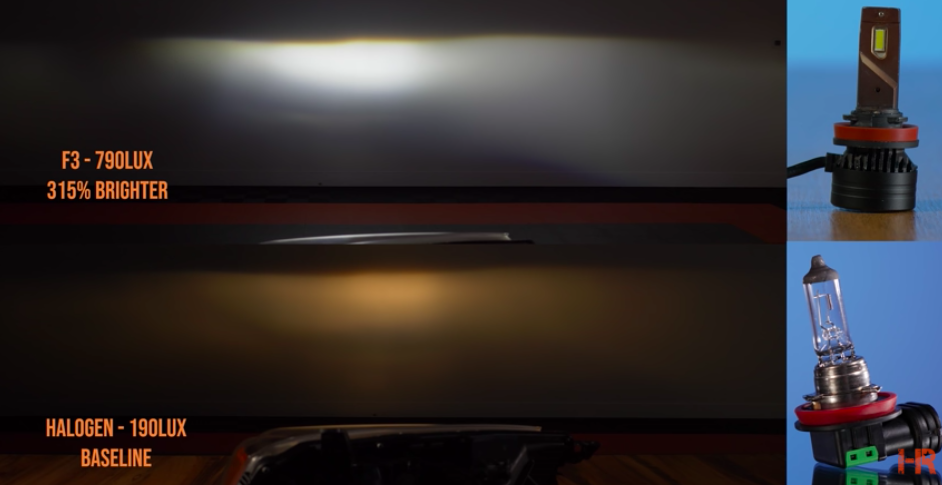 The increase in brightness dropped significantly from there. Out of all 25, the next brightest bulb was the XenonDepot Extreme LED Pro. This bulb came in at 221% brighter than stock, high quality, and a good option. 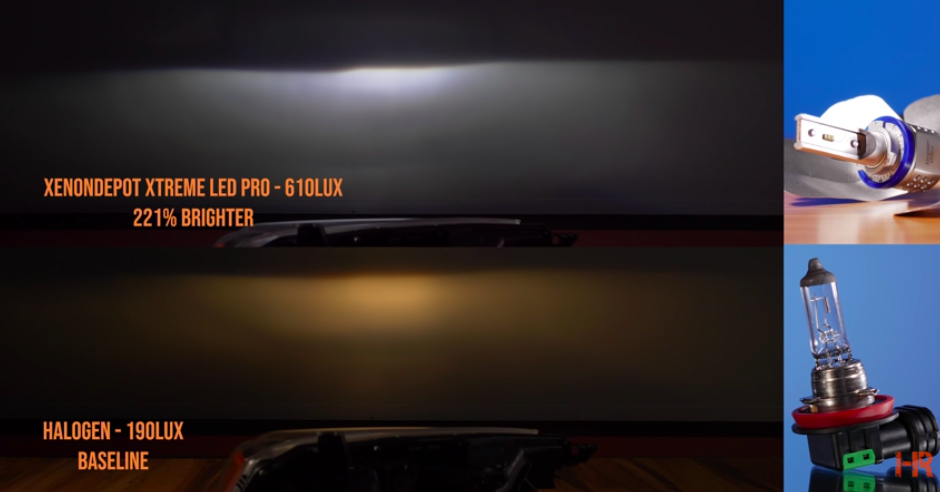 The fifth brightest bulb for a projector headlight in the entire lineup was the Diode Dynamics SL1, coming in at 210% brighter than stock. This bulb is the only one out of everything we tested made in the USA. It's super high quality.

It fit the foreigner headlight, which is a challenge in and of itself, had a good beam pattern, and it was twice as bright as the original halogen.

Everything below the Diode Dynamics SL1 came in at less than 200% brighter. So it's a stark difference if you go with anything that's not on the table. 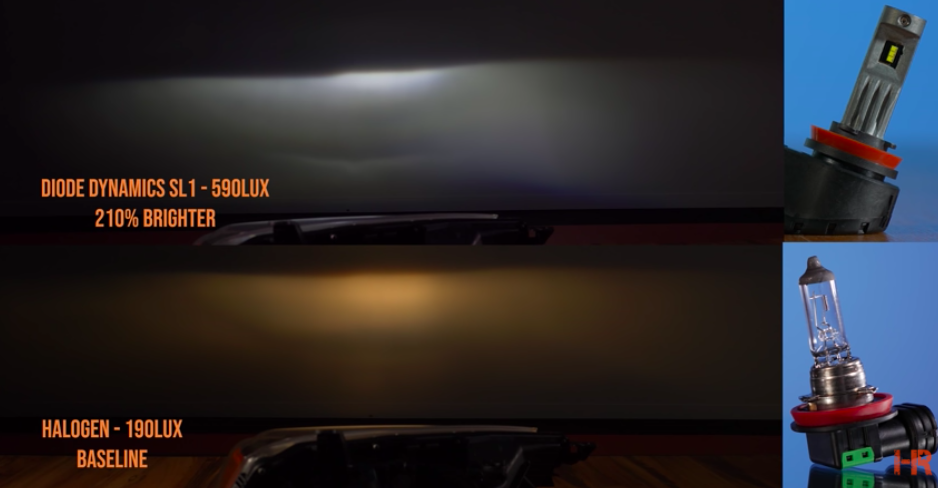 You're going to see two bizarre things happen. Number one, the same bulbs in the reflector headlight will be brighter than this projector test. That shows that one bulb can work well in one housing and poorly in another. So what we're looking for here are the top bulbs that do well in both types of headlights.

Next up is our reflector headlight testing. An interesting thing you're going to see is that the results in this test from the 2019 Ram 1500 reflector headlight are way brighter than that last projector headlight, and that's really common with led headlight bulbs. So don't think about the numbers in terms of Lux, because that's not important. You cannot duplicate our Lux measurements at home because we're in a different space, using other tools, different ambient lighting, and different surfaces.

The first one is the GTR Lighting Ultra Two. This thing came in at 709% brighter than the original halogen light bulb.

This little guy uses a state-of-the-art LED chipset. It uses the best fan in the industry for cooling, and the wiring and driver are second to none. 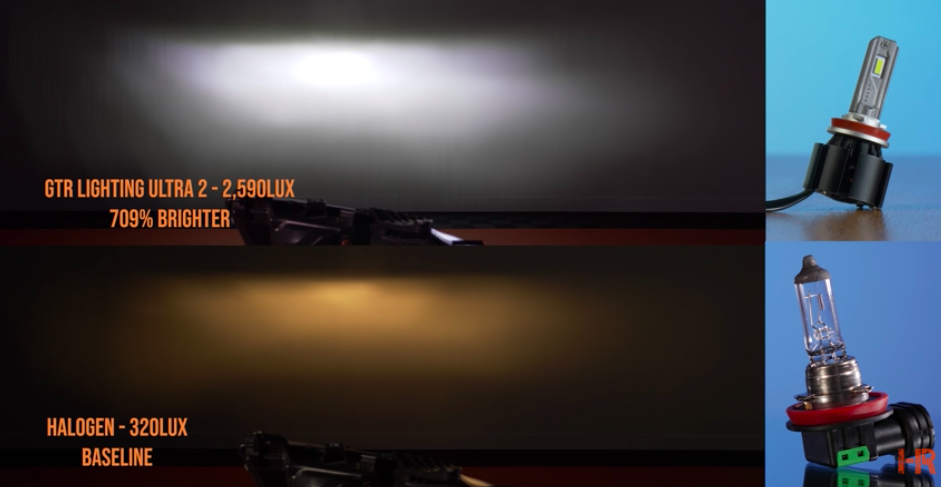 No surprise here, the next brightest bulb in the lineup was the F3 (shown below), coming in at 546% brighter, but we still have the same problem.

This is not a reliable bulb. They built it entirely out of balance, and the heat sink can't handle the amount of heat this thing makes. It's a recipe for disaster in anything you install it on. So yes, it's bright, it's got a good beam pattern, but it's still a waste of time. 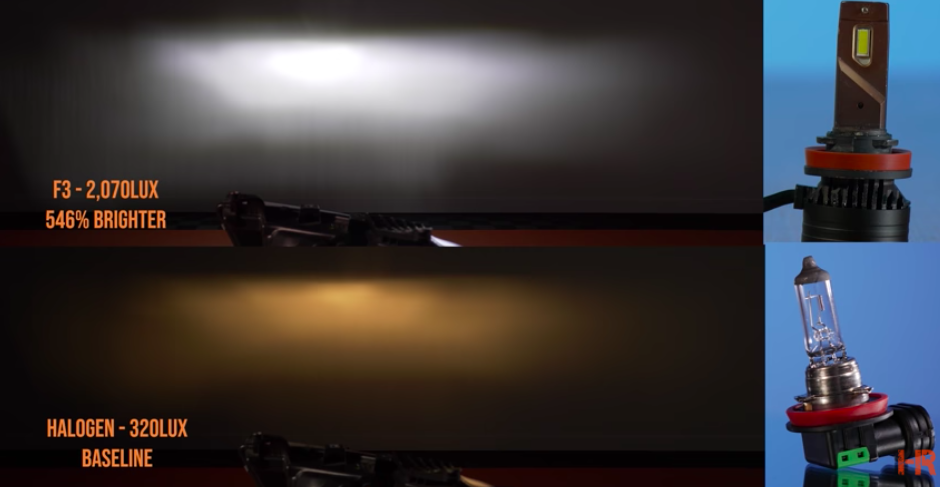 When testing the S-V-4 in the projector headlight, it came in second place. This test with the reflector headlight came in third, a little bit under the F3. The S-V-4 comes in at 500% brighter than stock, and you don't have those crazy cooling problems that the F3 has.

It's stable, high quality, and proven to work. The S-V-4 is an excellent option for all reflector headlights. 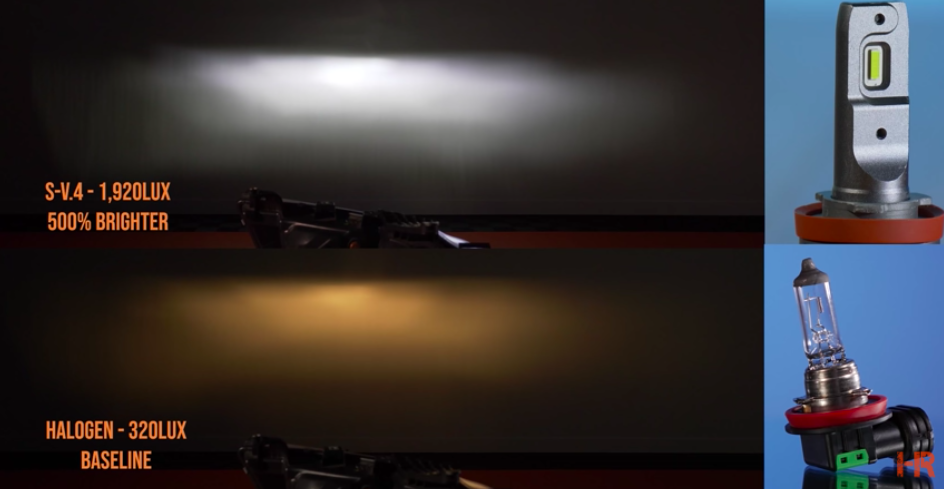 The fourth brightest bulb in our reflector headlight test was this one from SNGL, and we didn't just go by what we knew would be the worst led headlight bulb from this company. We bought what looked like it might be the best and put it to the test.

This thing came in at 434% brighter than stock, not quite as good as the top three, but a notable contender. In general, it seems like it's well-built, has a lot of the same characteristics as the GTR Lighting Ultra Two, but not quite as bright. 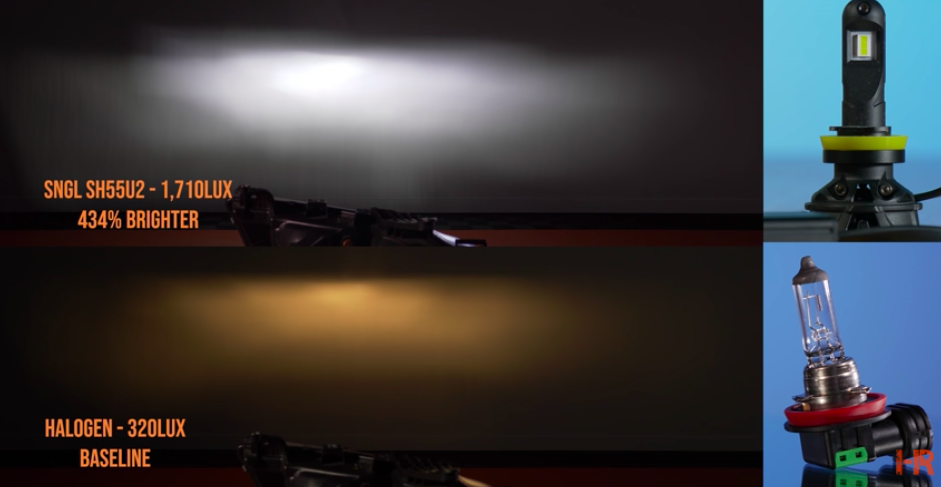 Coming in a hair under the SNGL bulb in the reflector headlight test was the Diode Dynamics, made in America, SL1, coming in at 396% brighter than the original halogen bulb. As I said before, this thing is super high quality, and it will be an excellent option for any project. 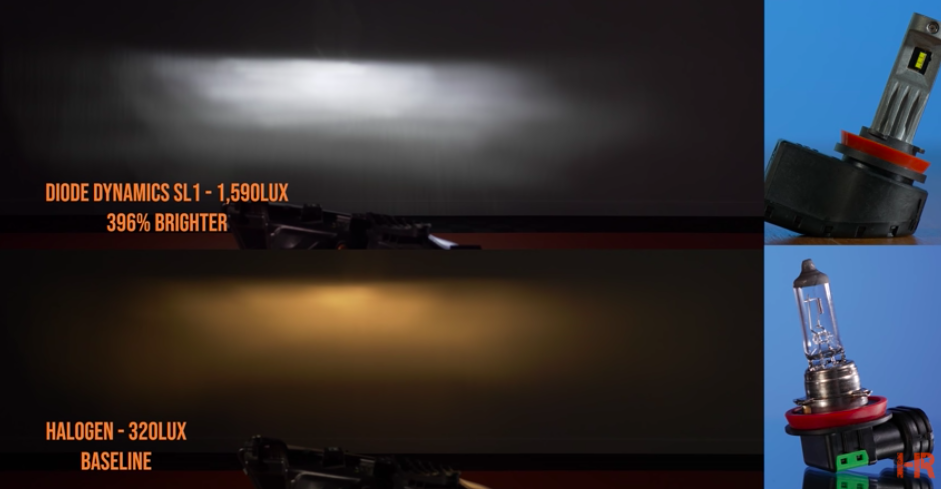 These are the top 10 brightest led headlight bulbs you can get today.

Now, there are two on the table that I absolutely would never recommend to my worst enemy. One of them practically burns itself to death and is built poorly. You'll be replacing it constantly. I can already see the comments now, "For the price of the ones you do recommend, I can buy four or five of the cheaper ones."

You're right, you could go that route if that's what you need to do, but you're going to regret that decision when the one that practically lights itself on fire is constantly burning out. Then, you get a ticket because you've got a headlight out, or the other poorly built one is guaranteed to fail, and you're constantly replacing your light bulbs, pulling off your bumper, going on Amazon, and making RMA request after RMA request.

I'm telling you, my recommendation is going to make your life better and easier. The GTR Lighting Ultra Two came out on top on both individual tests, so it's no surprise it's on the top of the overall test.

The F3 tied for second and third place on both tests but designed poorly. This thing's going to melt itself until it doesn't work anymore.

The S-V-4 was constantly in the top three, and it's a channel favorite. Everybody knows that that's a solid bulb.

This newcomer from SNGL was a surprise because of the quality of the build. It's built just as well as other products and held its own for the brightness comparison.

The Diode Dynamics SL1 is a crowd favorite as well, made in America and super high quality. You really can't go wrong at that price and that brightness.

The Morimoto Two Stroke, one of the most famous bulbs globally, is obviously on this list.

The NOVSight bulb, this red one here, came out in the top 10, and I absolutely can't recommend this one either.

The NOVSight has cheap construction, is poorly built, and there's no external driver to warrant that amount of light. This thing is guaranteed to give you all kinds of problems down the road.

With the XenonDepot Extreme LED Pro, I was a little bit surprised at how well it did in the projector headlight. This bulb is high quality, it's super reliable, and it's going to fit any application, reflector, or projector.

Although it may not be the brightest bulb, I'm a big fan of the VLED's Micro Evolution. Its construction and style are top-notch, and of course, you have the GTR Lighting CSP Mini if you need something super small with a decent punch at a reasonable price.

What we're left with are these eight bulbs.

If you buy something that's on the table in front of me, you're going to be happy. The GTR Lighting Ultra Two and the S-V-4 are constantly coming out on our tests. Those are the best of the best. These three in the middle are a great option if you want something that's pretty bright and still reliable. The three down here are the brightest of the least bright headlights.

They're good options, they've got solid construction, and they're significantly brighter than stock. If you have any questions about which one of these eight would be best for your next project, we'd love to talk to you. We have a massive database on which bulbs work the best in different headlights, and of course, we do the testing.

If you like this video, please check out the rest of our videos on our channel because chances are there's something else you're going to enjoy there too. All we do is test and install, and you're guaranteed to learn something from Headlight Revolution.

HR Tested - Our Mission and Promise - We Do Lighting Better Because We Test!

Is 100w halogen brighter than LED? Yes and No.